Our Testing & Flushing Hydraulic Power Unit (TFHPU) delivers low and high pressure filtered hydraulic fluid for mobile pressure testing applications on topside & subsea control valves and umbilicals; the flushing pump generates the required flow and pressure for mobile flushing applications on umbilical’s and tube installations; these units can be designed as fully enclosed or as open framework and generally comprises of a reservoir, electrically driven hydraulic flushing pump, electrically operated LP and HP pressure pumps, accumulators, filters, flow meter which provides accurate data measurement ensuring turbulent flow is achieved throughout the flushing process; sample point for connection to an electronic particle analyzer or for use with a Patch Test Kit and Comparison Slides. 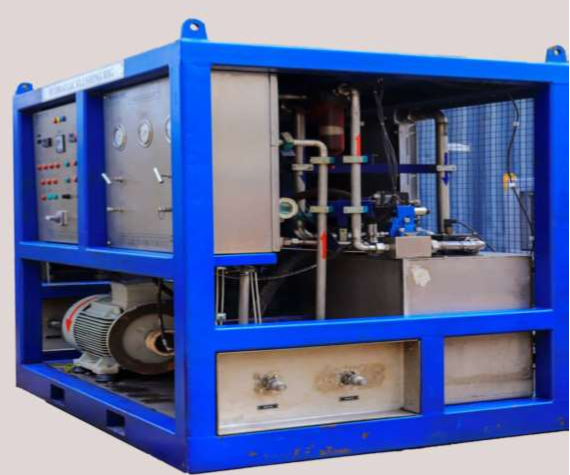 Hydroblasting is a technique for cleaning internal and external surfaces, which relies entirely on the sheer force of water from a pressurized source to achieve the desired cleaning effect on the intended surface. Abrasives, toxic and potentially harmful chemicals are not used in hydroblasting systems.  A highly pressurized and focused stream of water, generally above 10,000 psi, comes from a hydro blasting machine, which includes a pressure pump and the right nozzles. This cleaning method may also require enclosures to protect the adjacent areas or structures from unwanted water spray as well as
a collector or catcher of the blasted-off waste or contamination.
Hydroblasting is also called “water blasting”. It is being used in a growing number of applications previously dominated by abrasive blasting techniques.

Hydroblasting or water blasting can effectively remove a wide variety of tough dirt in difficult-toreach points or locations in a safe and efficient manner.Infact, the results are comparable to
those of cleaning techniques that use abrasives and cleaning agents, but without the dust and health hazards, which allows the workers to focus on their daily tasks in a health-friendly workplace environment.

Hydroblasting operations are commonly categorized as high-pressure and ultra-high pressure hydroblasting based on the following operating pressures: 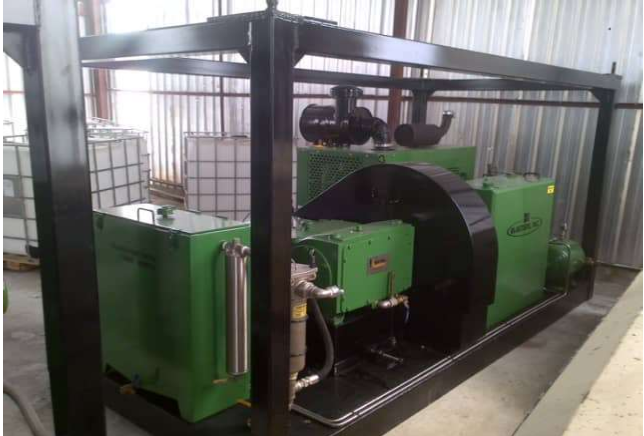 With the varying problems that occur during hook-up and commissioning or shutdown operations, it has become apparent that an integrated service is required. ENVITE’s response has been to form a team capable of finding and repairing leaks. Offering this extra dimension can help save time and money since one contractor can control a complete leak testing project with fewer personnel onboard overall, but effectively doing more work.

The bolt load on the leaking flange is initially taken to the minimum acceptable level in accordance with specifications. The tension is then progressively increased in increments until the leak is sealed or until the maximum recommended bolt load is reached. If at this bolt load the leak has not sealed then this will be reported to the client to approve further bolt tensioning or allow inspection, gasket renewal or reworking. 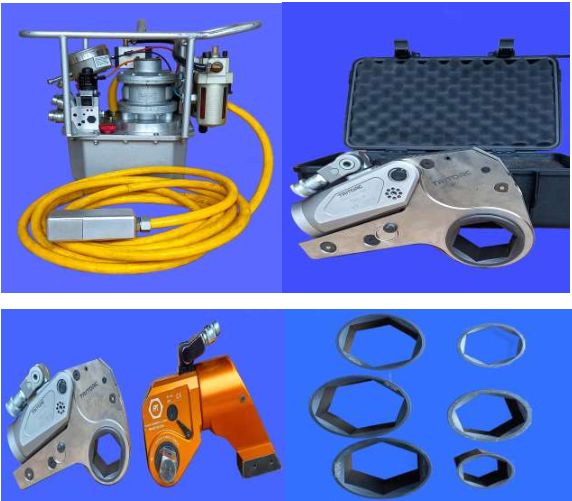 Purging means the replacement of an atmosphere of undesired composition in an enclosure by another atmosphere of required composition. ENVITE NIGERIA LIMITED has used Nitrogen extensively for replacing an active and explosive atmosphere because of its inert nature. The objective is to reduce the
hydrocarbon level to below its Lower Explosive Level (LEL) so that on contact with air, the hydrocarbon concentration is insufficient to create an explosive mixture with atmospheric oxygen.

Nitrogen purging is used for both start up and shutdown operations in order to replace the existing system atmosphere with safe and inert nitrogen blanket. During start-up operations, purging is performed to reduce the oxygen content to typically below 2% by volume and thus prevent any explosive mixtures being formed when hydrocarbons are introduced. During shutdown operations, the hydrocarbon content is purged out of the system to leave an inert atmosphere, which is below the lower explosive limit of that hydrocarbon. 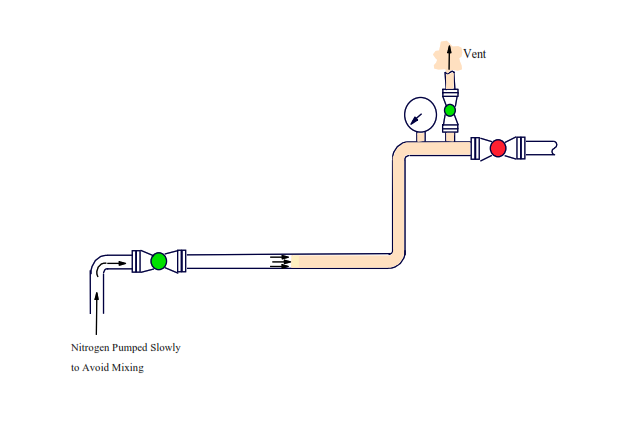 As mentioned previously, this method is unsuitable for systems with complex piping work or with obstructions such as baffles or pipe coils, etc. In such cases, short-circuiting of the nitrogen between the injection and vent points may occur, leaving hydrocarbons trapped in ―dead legs.‖ In instances such as these, an alternative method should be used such as dilution purging.

In this method, the equipment or vessel to be purged is pressurized with Nitrogen and left for a period to allow for complete mixing of Nitrogen and initial equipment atmosphere. The pressure is then released, generally to atmosphere. This method is restricted to equipment which can withstand purge design pressure. It is also advantageous in cases where pressurization is necessary for some other purpose, such as leak
testing for example or when only one connection is available for inlet and outlet.

ENVITE NIGERIA LIMITED is an indigenous company that is foremost in providing Commissioning Services, having developed and introduced many of the specialist techniques, which are now regularly used during the commissioning of process plant and pipelines.

ENVITE has in the past been involved in leak testing operations using the soap bubble test method, but has recently purchased a nitrogen/helium mixing pump and a portable mass spectrometer. We have also trained our personnel accordingly to meet up with the demand for Nitrogen/Helium Leak Testing
operation in the nation. 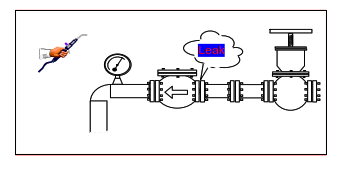 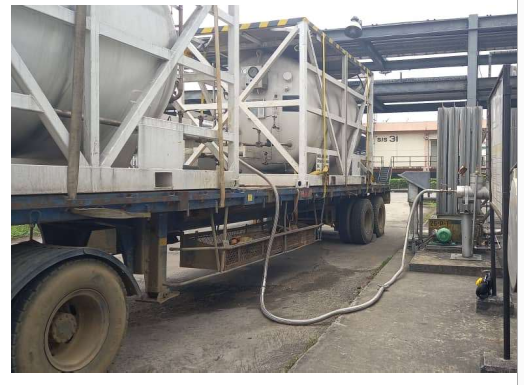 During system construction, chemical cleaning is used to remove mill scale from all compressors and pump suction lines. Stainless steel pipework also requires ‘etching’ to remove all traces of carbon steel and prevent subsequent corrosion. During production operations and shutdowns, cleaning is required to remove the build-up of scale and wax, etc from within the process pipework and heat exchangers.

Cleaning is normally performed by first filling and circulating the system as a closed loop in order to function test and check for any leaks. The water is then circulated continuously while adding the treatment. The treatment is then performed and monitored to ensure that all of the rust, scale, wax which was to be removed has gone. A passivation treatment is then required when acids or alkalis have been used in order to return the system to a neutral pH level prior to a corrosion protection treatment if required. MOG have a treatment chemical in line with new environmental legislation which can complete the cleaning process with no risk to personnel and less disposal problems.

All tanks to be cleaned out shall have all sensitive equipment that could be damaged by the treatment removed (e.g. control valves, flowmeters, instruments, filters, etc).  Chemical cleaning operations normally involve drying on completion of the chemical cleaning in order to maintain the condition of the system and prevent further oxidation.